Did Ubisoft make a mistake with Ghost Recon Frontline?

Over the last couple of years we’ve seen a boom in a particular genre of game – Battle Royale (BR). The more popular titles you will have heard of are the likes of Apex Legends, Fortnite and PUBG. With the occasional different styled BR game like the hysterical Fall Guys, which can only be described as if they ever made the old Takeshi’s Castle game show into a video game, where contestants are all blobby characters.

These games have become so popular, you don’t just find them on consoles and PC, you can even find full ports of the games on your mobile phones. It’s no longer a case of just using a smartphone for just keeping track of calendar appointments and emails, trying to find sportsbook deals on whichever search engine you use, or watching videos on TikTok and YouTube to pass the time. They’ve become full-on gaming machines.

Whilst many people have moved with the times though, there are those who are struggling to catch up. But do they need to? Ubisoft are a prime example, because they’ve been known for years to make great games. However, they’re now trying to evolve their games to break into these new markets. But why fix something that isn’t broken? Because if you ask fans of the Ghost Recon games, the reaction to the announcement of the latest Ghost Recon game couldn’t have been worse.

But why are fans of the series unhappy? What is it that Ubisoft have done to upset them since they revealed the game in October? Let’s take a look at some of the reasons behind the flopping response to Ghost Recon Frontline.

The problem with the whole BR genre now, is that if you’re going to release a BR game, it needs to be something that hasn’t been done before. Take Fall Guys for instance, that we mentioned before. By definition, it’s a BR game, as the last person standing wins. But it has not copied numerous other games by making it a shooter. It’s more of a silly, goofy kind of game that is fun to play and doesn’t take itself too seriously.

If you look at the rest though, they’re all pretty similar. You drop in, get guns, kill everyone who opposes you and win. Or alternatively, drop in, fail to find a gun, get killed and lose. Sure there are some differences; you have the graphical design of Fortnite, the lore behind the different characters in Apex Legends, and well, PUBG was just around first really so it kind of just still exists alongside those.

But other companies have come in and failed when trying to make an impact. One such company is Hi-Rez Studios, who are behind the hit game Smite. They are notorious for trying to mimic other popular titles but in a way where the game is free-to-play to try and draw people in, just like their title Paladins, which mimics the setup of Overwatch. Even Ubisoft failed when they released Hyper Scape to rival CS:GO. Whilst it got off to a strong start, it soon dipped and interest in the game dwindled. So why would Ubisoft try again with Frontline?

It’s all about the money

To answer the question I asked in the last section, it’s clear it is all about the money. Obviously, if you don’t make money, you can’t make games. And the BR genre is making publishers a lot of money, but not from people buying the games, because they’re free. It’s all the extras you get with it that make the big bucks. New skins for players and their weapons, releasing new emotes that gamers can use to dance on their enemies corpses, plus so much more.

That’s how they get you. They give you the game for free, and then you buy a battle pass that rewards you for playing with cool loot, or you buy loot outright during special events. Now, if you’re smart, most battle passes give free in-game currency, whether that be like on Splitgate or any other number of games. Once you buy one battle pass, if you complete it, you normally get enough currency to buy the next. It’s only when you start spending it on skins that you need to reinvest more money.

But that’s just what people do. They want their characters to look amazing. They want the nice Halloween themed content that turns your head into a pumpkin, or allows you to wear a Santa hat at Christmas. And they want you to keep buying their battle passes. Because, if they just made a standard game, you may spend $50/€50/£50 on that game, and could play it for an entire year if it has online multiplayer.

Now, that’s a lot of money for some people. But what isn’t a lot of money? $10/€10/£10 per month, because it’s a more manageable amount like a month of Netflix. But over that same period of a year, they’ll have made more than double what they’d get for charging for a single game. 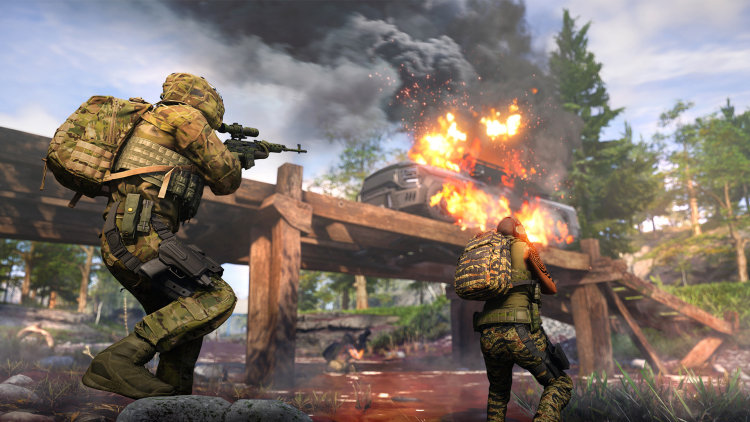 The core reason that people are unhappy is not because they don’t want Ubisoft to make money, or because it’s a game they can play elsewhere, it’s because when it comes to the bare bones, Frontline is not a Ghost Recon game. Sure, they claim it is class-based and uses tactical elements, characteristics that are synonymous with Ghost Recon titles, but it has also changed a lot as well.

This is a series that has never really been a first-person shooter after the original title, and it has never been about going out and killing everything in sight. It is a game about realism, tactical thinking, slowing things down and having incredible campaigns where you can execute missions stealthily. Instead, fans are getting the opposite of what they have asked for. They feel like they’re being ignored.

On top of that, they’re also being given every Tom Clancy game besides the main one they have been calling out for. A new Splinter Cell. Sure, there are fans of Ghost Recon who may not like the other Tom Clancy series, but for many they love them all. But when they just keep churning out the same one, and doing a bad job of it, it does leave the question of, why are they doing it? And what went wrong? These series used to be so popular because they were so different. Now it feels like they’re trying too hard to be like their competitors, which isn’t what their loyal fans want.

Fortunately, for now, despite allowing players to beta test back in October, the game’s release has been delayed. If that has been brought about by the fans reaction, this could be the best thing to happen to Frontline, if Ubisoft and its developers go away and work on the game based on feedback. If they don’t, they continue going down this path. Not only are Ubisoft going to face a poor uptake for their game, they’re going to lose loyal fans by pushing them away.