Ghost Recon Phantoms isn’t too bad when it comes to key bindings, there are not a huge amount of keys to remember in order to play this shooter effectively. However there is a more fun way to play, and you might even find that it speeds up some of your gameplay depending on how creative you get. If you don’t have a multi-button mouse, voice control also gives you the option of having the convenience of a multi-button mouse setup, without all the buttons – by using voice commands instead.

I’ve been playing with only 3 voice commands to substitute key presses in Ghost Recon Phantoms, but you can bind as many voice commands as you wish. When I’m playing I have my cloak activation and de-activation mapped to my voice saying “cloak”, I bring up the score table for 1.5 seconds by saying “score”, and I call out “reload” to… well you get the picture…

This is all achievable thanks to two things, windows built in speech recognition, and Voice Attack, an inexpensive app with a free trial that works with any game!

After following this quick guide you’ll have Voice Attack installed and configured with your personalized game commands, and we’ll also show you how to customize speech recognition to allow for regional accents so that your commands will work perfectly for you every time!

Once it’s installed, create a new profile. On the demo there is only one profile so just name it Ghost Recon Phantoms as shown here. 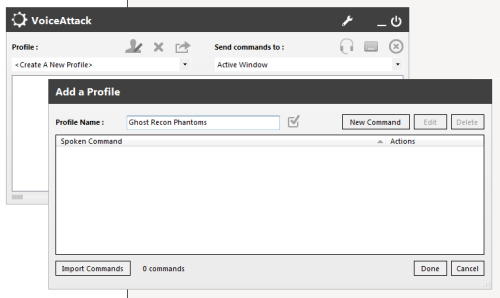 Now we are going to add our first Phantoms voice command, which in this example will be to bring up the score overlay and display it for 1.5 seconds.

On the following screen, shown below, first of all type in the word that you are going to say to activate the command, so in this case I have typed in “score”. 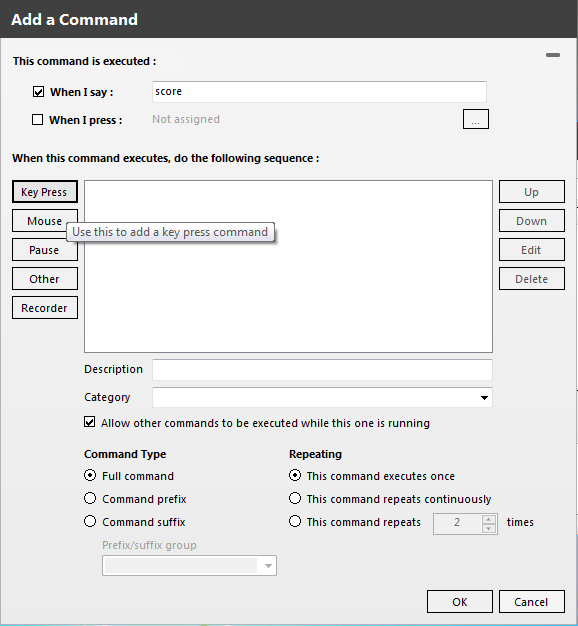 Now click the Key Press button highlighted in the image above, this will open up the dialogue shown below… 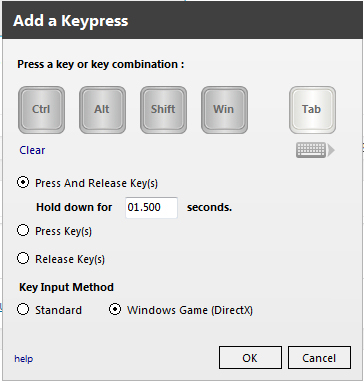 This is the most important screen for setting up your controls so lets go through the various options quickly.

First off you can see I have set the key binding. You can set it to activate multiple key combo’s or in this case, just one key, ie Tab. So to do this just click on the button above the keyboard icon, then press your Tab key. The word Tab will now appear on the blank button as shown above.

Now, we want the score screen to display long enough to get a quick read of it, without blocking our view for too long, so I have set the HOLD DOWN option to 1.5 seconds. For a normal key press, ie “reload” you would leave this at the default 0.1 seconds. This is one option you can tweak if you find the button is not being activated in game even though the voice is being recognized. During play testing, you can alt-tab out and tell if voice attack is recognizing the commands  thanks to a open log window which displays all activity.

The second option here to note is the Key Input Method. Usually, leave it at the default Direct X setting, however if your command is not working in game, try switching this to Standard. You can do this on the fly, no need to restart the game or Voice Attack. In Ghost Recon Phantoms the DirextX setting worked fine for me, but in Watchdogs some keys worked on DirectX, some other keys worked with Standard. 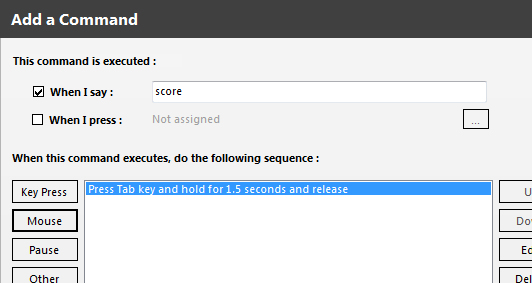 Now you should try the command to see if it is recognised or not, before going into game! Into your microphone say “score”, and the log window should confirm the command.

In the example below you can see the log displaying the results as I say “score” “cloak” and ” reload” into my microphone. This means it is all working, and voice command is ready to work in Ghost Recon Phantoms! Jump into the game and try it out!

As you will have seen, Voice Attack has many options not covered here, but for getting it up and running quickly in Ghost Recon Phantoms, you just need the basics described above to be up and running in under 5 minutes.

If you find you accent means some words are working fine, but Voice Attack just can’t recognise certain words and keeps displaying an incorrect word, the problem is not voice attack, it is actually windows voice recognition.  What I did in this case was as follows…

With windows speech recognition activated you should see a small box with “listening” displayed on your desktop. Now say “open speech dictionary” and choose the Edit option. This allows you to speak a word into the microphone and have windows recognise it as the word being edited. In effect, replacing what ever sound sample t has on file, with your actual voice example. Full instructions on this aspect of tuning can be found on this Microsoft support page.

Once you have completed this quick tweak, you can immediately switch back to Voice Attack, say the word out loud, and you should see it as “recognised” in the log window!

Voice Attack may not be the natural choice for shooters, it is actually awesome in other games, such as the upcoming Elite Dangerous as shown here, however it can add a new dimension to Ghost Recon Phantoms, so give it a try, it’s free and will take 5 minutes to set up so what’s to lose!

In a few years voice commands will be built into most games, until then enjoy this fantastic little app, it opens up a whole lot of potential for your games….

If you need any further help, just ask in the comment section below.