Hi Ghostrecon.net community, this is my experience with the pre-alpha build of Ghost Recon Wildlands in Paris June 2015 before the announcement of the game at e3. Ubisoft invited me and other GR community members to playtest and give our feedback to the developers. We were fortunate to play the game with no restrictions and free to mess around and explore the world.

The build we played was a little older than the one you saw in the e3 reveal. This was a very early pre-alpha build with not 100% complete assets. Anything you read here is subject to be changed or removed in the final product, as we tested the game at a very early stage. 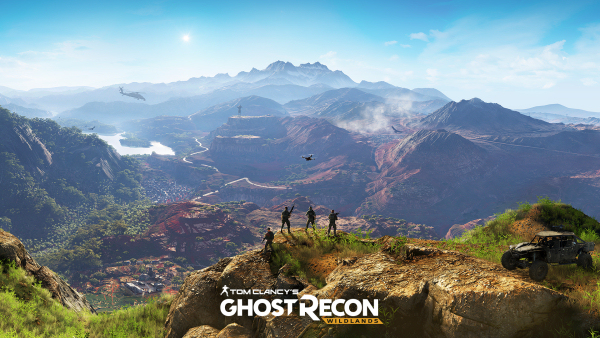 As you know the game is focused on a 4-man coop experience and the 4 of us, Fréderic, Cortexian, Rocky and me teamed up. From my understanding, the game can be played with AI or up to 3 human players. Friends can also seamlessly join your game in progress.

The first thing I notice is the variation in the landscape of the world. The environments looked impressive and the scale was vast as you could, in fact, move to any place in the world without feeling boxed in. Being set in Bolivia the map offers different environments like deserts, dense jungles, villages, snowy mountains and more we didn’t get a chance to explore in our session.

The engine felt solid and the graphics for a pre-alpha was very impressive and what you’d expect for a title on the newer consoles and PC. The team at Ubisoft Paris have created their own engine specifically for Wildlands and it showed in this build. As ghosts, you have to become entrenched in your environment and in this engine it seems like you’ll get to take advantage of this.

We all started at a rally point in the middle of the map with loads of missions near us. At the rally point, we had several dirt bikes and an armoured buggy to our disposal. We all jumped in the buggy and decided straight away to go for a capture a helicopter mission, even if it was heavily fortified and being warned beforehand!  The passengers could lean out of the vehicle and engage if needed.

On our way to the mission, we would see AI driving around and helicopters patrolling the map. Even if all of us were primarily PC players we managed to capture the helicopter even though we were playing with controllers. We died multiple times, but we could respawn on teammates or be revived by teammates in this build.

After enjoying the view, we decided to try and jump out the helicopter to experience a halo jump. It felt great and when you pulled your parachute you could even see the details in the animation when the arms pull towards the direction you want to go. 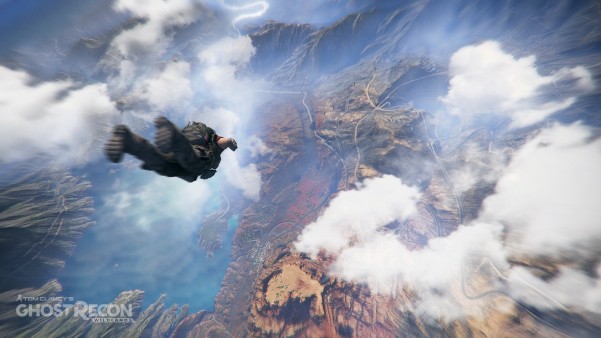 The loadout for each character was default in our build, this enables you to choose carefully what you equip and how you work as a team. We had a marksman posted on a higher elevation of the compound and would mark and take out any nearing enemies to the group moving in on the target. Communication and teamplay is still a vital tool in the Tom Clancy games we’ve been used to.

We split up afterwards and I teamed up with Cortexian, we decided to explore an outpost across the salt desert located on the west side of the map. When we reached the compound it was night time and we had to use our night vision goggles. We tried to be stealthy and use the darkness as cover and this worked great. We managed to take out the fuel reserve and steal the chopper. We then explored more of the map before halo jumping again! (it was fun)

Later on we re-grouped with Rocky and Fréderic and decided to attack an industrial fabric, and again we stole a chopper. Cortexian was a great pilot and we also managed to see the snowy mountains and see the vast landscape of the world.

To my dismay, we had to use a Xbox controller, being a PC gamer this was quite unnatural for me. However, I made do and learned as I went. The controls are very much work in progress along with everything we tried. It felt natural and not that hard to get into, even for me being a PC gamer.

Even if we had to use Xbox controllers, the build was running on a PC and they assured us the PC version will not be an afterthought. We had a lot of PC specific questions and the devs wanted to hear our thoughts on the PC version. They have people dedicated to work on the PC version and it’s features.

Pressing the different buttons I managed the following in regards to movement:

You can vault, crouch and go prone, in the version we played there was no leaning.
When you are prone your character will move similar like in ARMA 3. The upper body will rotate the direction you look while being prone. I really enjoyed this feature.
You can holster your weapon. Changing from primary to secondary wasn’t super fast which I liked.
When you are close enough you can take someone hostage and use them as a human shield.

You could check the map for any active missions and set a marker for your teammates to see. The game doesn’t tell you how to approach any missions or limit you. You can do it alone while your teammates do other missions or you can coordinate like a proper ghost team. If one mission entails blowing up a fuel reserve, the game won’t care if you load up a chopper with c4, parachute out of it and blow it up once it hits the target. This opens for a lot of different tactics for teams and only their imagination will restrict players in terms of planning and executing missions.

The world is alive and responds to the players actions. If you attack a base full of enemies, their allies will know if you don’t knock out their communications systems fast. This will lead to the other bases to fortify heavier and anticipate any impending attacks.

There is a day/night cycle that will impact how you approach your target. You can play stealthy and take out a target without alerting the enemy. Given our limited time we didn’t manage to try this approach effectively with silencers. 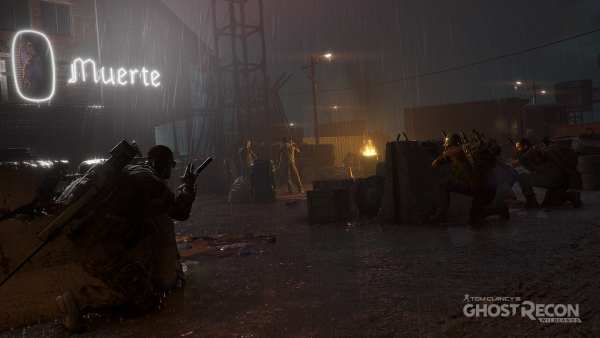 The missions themselves that we managed to try were destroying cocaine storages, blow up fuel reserves, steal vehicles, assassinate a VIP before he escapes and destroying communication towers. There is some variation to the missions as we don’t know them all and no info on the single player was given at this stage. In my experience with the ARMA 3 mod Wastelands, it’s the journey and your approach to the mission that is quite fun and builds up tension. I had the same feeling playing Ghost Recon Wildlands because there are many other elements in the world that can affect your plans if someone engages you or you decide to do another mission on the fly.

To conclude my first impressions of this very early pre-alpha build of Ghost Recon Wildlands, it’s very promising for a pre-alpha, there is still a lot to be finalized and see how it all comes together in the final product. It’s still a work in progress with many features still being worked up.

It’s a fresh take on the series with a open non-linear world, vehicles and focus on freedom and teamwork. I’m eager to play more and I can see myself playing this game with friends with the main focus on co-op. My general impressions are the devs are quite excited about this new direction and new opportunities their new engine offers. It will naturally be compared with Battlefield, Just Cause, Far Cry, GTA and ARMA but I think the setting is believable for a Tom Clancy title to set it apart from the competitors.

I can’t wait to learn more and get my hands on it again. If you have any questions, please let us know and we will try to address them in the forums. Please note we only got to play coop.

Discuss this article on our Wildlands forums.