A little bit later than advertised I am pleased to announce the winners of the gaming t-shirt competition we ran recently in conjuction with Split Reason. 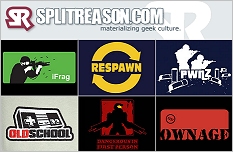 The first winner is GR.net Supporter and forum regular Cpl Ledanek, who selected the I Frag t-shirt as his prize. The second person drawn randomly thanks to Random.org was Sudeerax, who selected the Kill Bill Linux t-shirt as a prize. Congratulations to you both, Split Reason will be in touch shortly to arrange delivery!

For those that missed out, I’ll be posting a new t-shirt competition very very soon, so check back later on to stand a chance to win a very cool Ghost Recon Advanced Warfighter T-Shirt!