Operation Motherland – How Ubisoft Turned the Frontline Frown Upside Down.

Well this could not have come at a better time! On the back of an abysmal period for Ubisoft with massive community kickback over Ghost Recon Frontline Ubisoft released some pretty exciting and upbeat news about Operation Motherland – the latest Title Update for Breakpoint, and it looks great. The amount of content in Update 4.1.0 would arguably justify a DLC price tag, but it’s all absolutely free, dropping on Tuesday 2nd November 2021! Get ready for a fairly hefty download though, there’s a lot of content in Motherland so depending on your platform you’ll need to ensure you have between 45-51Gb of free space. Considering that the full Breakpoint game is around 65Gb, this free update is huge! Let us know your thoughts in our Motherland forum.

This is perhaps the biggest surprise, and the most welcome feature of this update – Motherland adopts the Wildlands gameplay feature of retaking the island region by region. This is a totally new direction from Breakpoint’s story mode and fans of Wildlands will now be able to enjoy the gameplay of Wildlands with all the additional benefits that Breakpoint brings. Conquest mode is available right from the objective board so it can be played even if you have not played right through the Breakpoint story mode. And of course, Operation Motherland can be played in co-op so you can enjoy these new missions with your friends. 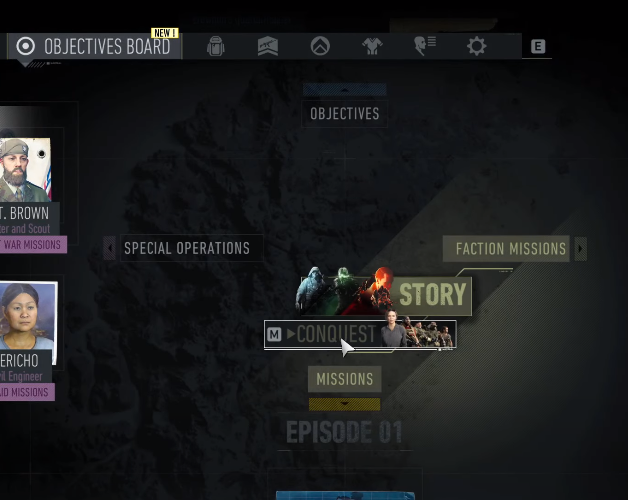 So how many missions have Ubisoft created in this new Conquest challenge to re-take Auroa? 10? 20? 30? No – there are SIXTY new missions in the absolutely free update. These are however small missions, more like Wildlands side missions, nevertheless, this is a lot of free content to enjoy in a visually improved environment.

Similarly to Wildlands, the missions can be undertaken in any order, but there will be impacts on how the game plays out depending on the players strategy and approach. For example, the island rebel faction known as the Outcasts will become emboldened and empowered by Ghost successes and will be more inclined to rally support in the fight against the invaders – Bodark.

On completing Conquest mode mission there are around 30 unlocks ranging from cars to vests and new weapons (see below). Players who make it to Level 99 are awarded the Title of 1st Battalion, 5th SFG and a special titanium weapon paint.

As the Ghosts move from region to region they will be facing an old adversary Special Training Unit 500 – better known as Bodark. This Russian special forces unit first appeared in Ghost Recon : Alpha and continue to present the Ghosts with a significant challenge.

Further Bodark Lore can be viewed on YouTube. This time the Bodark present an all new challenge in the shape of 5 Bodark specialists, or what Ubisoft call archetypes. These Russian Spetsnaz soldiers will require players to adopt different strategies in order to repel these invading forces from each of the regions. During the very first Operation Motherland mission, the Bodark can be eliminated with good use of sync shots, placement and headshots. However in later missions the Bodark will become much more of a challenge.

The Tactician uses comms to call up reinforcements – identify this Bodark and take him out first to avoid being overwhelmed by Bodark reinforcements.

The Oppressor is a heavily armoured fearless front line specialist equipped with an SMG.

The dreadnought is also heavily protected and operates behind the line to super the Oppressors. Use Sync shot to let your teammates remove this risk at a distance.

The rifleman trooper might be a Bodark grunt, they come in numbers so beware of initiating a firefight with troopers

The seeker will provide a whole new challenge for the Ghosts as this Trooper comes equipped with optical camo (hint: bring your thermal vision)

The weapons system has seen an overhaul on Operation Motherland with a new weapon mastery system that allows players to use skill points to increase a weapons characteristics. This is great news, players will be able to tune their favourite weapon to be their own personal liking. There has also been some sound updates to improve the sound of the M4A1, G28 and TAC50.

The AC-AR is unlocked at Level 80

The ACR is back – listen to it below in the official tweet!

The ACR is back! Prepare to update your loadout at Maria's Shop when Operation Motherland comes out on November 2nd. pic.twitter.com/9eRhkEa8hY

There will be 11 new all Russian vehicles to unlock on the island: 6 cars and 5 helicopters from the RT-5 Shepherd to the Overseer MkII. These are reskinned assets from Breakpoint and not entirely new models.

Returning to Ghost Recon in Operation Motherland is an old player favourite – optical camo. Not just any optical camo though, things have improved since Future Soldier and the camo now comes with new gameplay features that will require players to monitor battery depletion and lifespan if they are to make effective use of the camo. Not only that, players can increase the reload rate while using camo and it’s effectiveness in the battlefield by collecting optical camo bonuses spread across the regions. Players will rank the optical camo from a testing phase, to effective rating, to battle ready condition.

Breakpoint is already a fantastic looking open world game – but with Operation Motherland things are about to become even more immersion and realistic with the introduction of some new assets and graphic improvements. Updates include birds, insects, marshes, clouds, fog, rain, and lighting – all benefiting from graphic boosts to increase the ambiance of an island campaign.

To be fair, this is a massive update that could easily command a DLC price tag, however the benefits don’t stop there! There are a number of tweaks and fixes to address community feedback and some minor but long standing game issues. For example, insta-death from careless base jumping will be a frustration of the past, hallelujah! To improve the jump process, the jump button can be held for longer rather than trying to punch it at the exact right milli-second. Similarly, sliding has been tweaked to make it more realistic, with less sliding animations. There’s also tweaks to animation to make slope CQB more enjoyable.

There are also well over 30 games fixes to address reported AI, audio and customisation issues. Ubisoft have published the full patch notes here. Discuss in our Ghost Recon forums here.