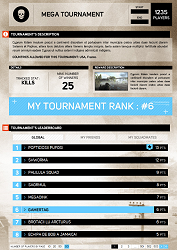 The system tracks player statistics against a number of pre-set challenges, for example, Number of Headshots, or Kills as a Rifleman etc. Ubisoft have plans for many different challenges, and there will be prizes for the top scoring gamers. Thanks to Ubisoft’s Antoine Emond we’ve been permitted an exclusive peek at this new Future Soldier competition system and we’re convinced it’s going to be a huge hit with gamers.

Tournament details will be displayed in Ghost Recon Network and will detail the number of participants, and where players rank in the competition, using leaderboard stats so you can see exactly how you are placed. The challenge, the number of winners allocated, any zone restrictions (ie Euro/USA), the end date, and the reward up for grabs will also be explained. Because it is all run through the Ghost Recon Network, gamers can sign up for multiple tournaments and easily check their progress.

Best news of all this feature is multi format and almost ready for prime time! You could be participating in the first Ghost Recon Future Soldier tournament very soon! Console versions are being rolled out first, followed by the PC version. These competitions offer great bragging rights for the Future Soldier hardcore and the chance to win some great prizes too.

In association with Ubisoft we’ll be publishing details of the first competition here shortly! Discuss this new feature in our forums, and keep checking the Official Ubisoft Forums for the official announcement soon.