The live action Ghost Recon Future Soldier short movie was officially announced this weekend at Comic-Con 2010. Ubi Kimi was there with a couple of bodyguards to promo the movie to all Comic-Con fans. 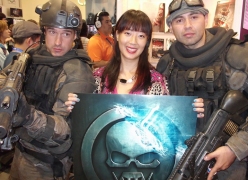 Titled Ghost Recon Alpha, the movie is to be released next year and as previously mentioned is being directed by Francois Alaux.

While only one minute of unfinished footage was shown at Comic-Con, the final version is expected to be around 20 minutes in length.