Thanks to the eagles eyes of one of our splended forum members we bring you more news of Ghost Recon 4! Straight from play.com, the first news of an expected release date for the next title in the series. (Edit > Linked removed by Play.com!) 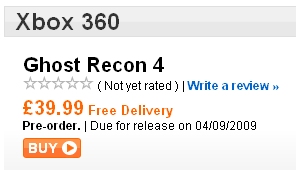 Although Ghost Recon 4 is not yet listed in Ubisoft’s release date schedule, it’s not unusual to see upcoming titles listed in online stores ahead of any official announcement. The quoted release date of September 2009 could possibly lead to a more realistic Christmas 2009 release going by past delays.