Chris “Pie4Foo” Abele has produced a one page report on his visit to the RSE offices to see Ghost Recon. Despite the previously reported power failure, Pie has come away with some interesting new information and covers the new HBS system, supported operating systems and the mod system.

Pies Tactics Website went offline a number of years ago, however the original report from 18 July 2001 is presented below.

On Monday, July 16 I had the opportunity to visit the Red Storm studios in Morrisville, North Carolina (near Raleigh). Along with the The Wargamer’s top dog, Mario Kroll, we descended up on the studios to see the latest alpha (or “pre-beta”) build of Ghost Recon. Ghost Recon is RSE’s upcoming military tactical-sim shooter. The game is based largely on the Rainbow Six franchise, but it is an entirely new franchise. Nonetheless, gamers familiar with the R6/RS series should find themselves very familiar with the play and feel of Ghost Recon.

Although we had last seen the game at E3 in a fairly functional format (see this E3 preview for more), I would soon be surprised at how many minor (yet, important) tweaks the developers had made to the game. With over 40 team members developing Ghost Recon, the title is quickly approaching its winter release date: things look very much on schedule for a pre-Christmas release date.

Where to begin? Well, it would be best to mention this visit was partially ruined by some unfortunate circumstances and poor planning by a local construction company. We arrived at RSE’s offices around the lunch hour and grabbed a short lunch with the PR folks. After lunch, we saw the game in play for about 45 minutes before…KLUNK! The power went out throughout their offices and throughout the local neighborhood. After a few minutes, we learned that the power would not be restored until the following day. What follows is a preview based on the gameplay we saw and a 30 minute conversation with key members of the development team.

First, let me begin with pictures from the day: 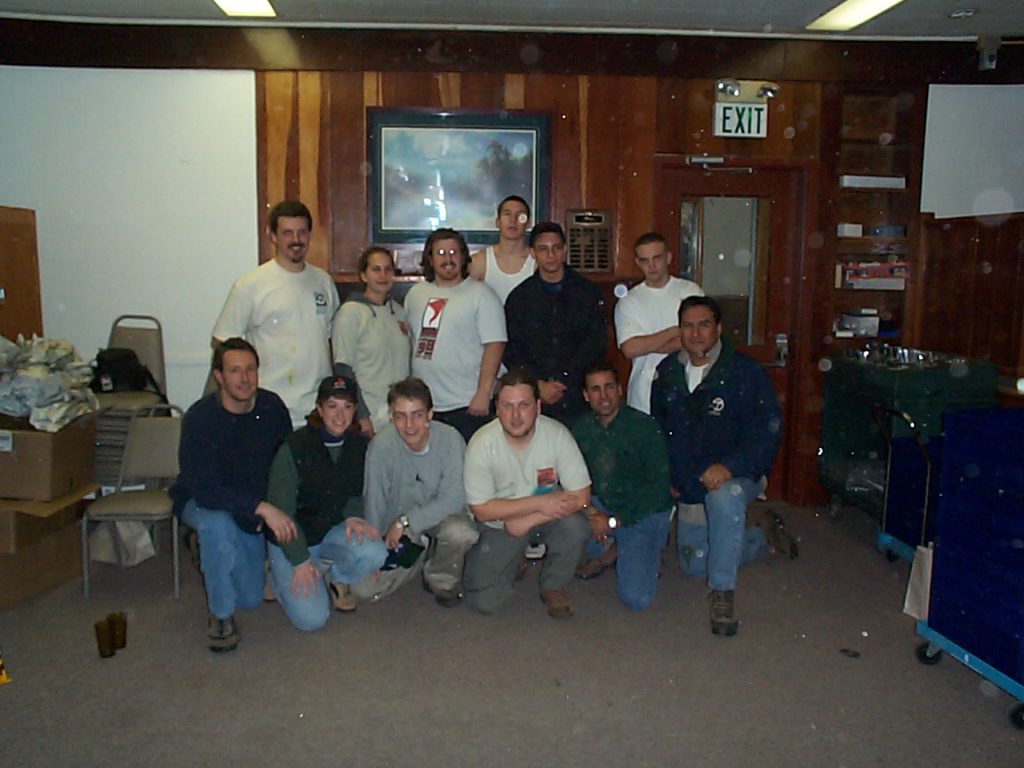 I meet engineer Greg Stelmack (Gary’s brother), reminding him of the continued importance of the slow side strafe

Do not adjust your monitors, those pictures are in fact all black. Joking aside, I was very appreciate of the development team’s efforts to accommodate my fan boy questions. At this point in the game’s development, a majority of the features have been implemented and the remaining tweaks primarily revolve around weapon balancing and reticule adjustments. As we learned in later conversations, the multiplayer and modding aspects of the game have yet to be fully ironed out. These will be the last features to be fixed up.

Because our hands-on preview was cut short by the power outage, I will post the details in bullet points. There really is not a lot of substantially new information compared to what I wrote up two months ago after my visit to E3 (read that here). In addition, a more generic preview is being posted on our network site, The Wargamer.

The heartbeat sensor/compass we discussed in our E3 preview has been substantially changed. Although this was unconfirmed, I would assume the HBS compass was changed based on concerned comments from the community. The new HBS compass is divided up into four sections (instead of the previous 8) and only works into a certain range. The compass is primarily necessary due to the tremendous size of the Ghost Recon maps. The detector points players in the right direction, and only works for targets to the range of 50 yards (or so – this distance has yet to be finalized). When a target comes inside that distance, the HBS compass device no longer detects the player, therefore preventing possible manipulation or triangulation tactics. The developers offered up the compass as a utility that mimics a soldier’s ability to sense when other persons are on the battlefield.

Graphics, animations and texture counts have been significantly increased and improved upon from Rogue Spear. Character texture counts are now up to 1200 – even little details, like pants getting soiled (or dusty, snowy, wet, etc.) are included. Ghost Recon simply looks good; watching the game played through night vision reminded me once again how much the graphics had been improved. And yes, night vision equipment is a requirement on some levels. These levels are all but pitch black.

Windows XP will be a supported platform (along with Windows 2000, ME and 9x).

Load times have been significantly reduced from Rogue Spear. Whereas Rogue Spear takes few seconds to go from the mission selection screen to the mission briefing screen, Ghost Recon takes no time at all. And the load time from kit selection to actually playing the game has been cut significantly. I saw the game perform exceptionally well (graphics features turned up) on a P3-800 MHz. The development team attributed this to better coding.

After the mission description screen, the kit selection screen offers several important tweaks. First, there are two classes of characters: 1) Standard and 2) Specialists. The former are simply characters who can be equipped with a majority of the guns in the game. The specialists may be equipped with specialty items, including an OICW (futuristic weapon) and Barret .50 caliber sniper rifle. Each specialty allows for a different set of weapons or kit items. Both groups can earn experience points to increase their skills in such categories as stealth, accuracy and more. It should be noted that all run speeds are the same, regardless of the weight of the arms and equipment.

After each mission, characters who played in the mission are awarded both medals and experience points. Medals can include the Medal of Honor, Purple Heart and so on. The experience points awarded can be assigned to the traits mentioned in the previous paragraph.

15 single player campaign missions will be included in the game. The final mission is set in a snow-covered Red Square.

One of the most remarkable “atmospheric” improvements in Ghost Recon is the extensive use of communication by your AI teammates. They confirm your orders, announce when targets have been spotted, declare kills, and much more. It’s difficult to explain, but I was particularly impressed with this new feature.

In order to minimize the gameplay abuse of rocket launchers, each launcher will only carry 2 missiles and will not do so-called “splash damage.”

When your reticule is placed over a friendly, the character’s name will appear above their head.

The mod system will be similar in nature to Urban Operation’s mod system. The most important difference is that only one mod will be allowed to be used. For example, players will no longer be able to play with BSW and NATO at the same time.

Mods may be distributed as one single .zip file and not require clients to unzip their contents into folders (this feature is still in development).

gMax and other level editors will not be released with Ghost Recon (read: no making of maps for Ghost Recon).

Multiplayer specs are largely incomplete at this point. Dedicated servers with up to 36 players remains the target.

Despite the size of the maps, insertion points will likely be placed on opposite ends of the map. Players will need to use their HBS compass to locate enemies.

Multiplayer gameplay modes have yet to be finalized, but one interesting proposed mode will involve four teams of nine players (four human opponents plus their eight AI soldiers). The AI troops will be controlled by the four human players, who will need to use their AI soldiers in a strategic manner in order to wipe out the three other teams. This, to me, sounds like a particularly promising gameplay mode.

All questions about cheat prevention (and so on) are met with: “no comments.”

If I missed something, or have questions about Ghost Recon, feel free to email me.