How to Cool your PC for Breakpoint

When Ubisoft showcased Ghost Recon Breakpoint: PC Features it served as a timely reminder to PC gamers that now was either the time to think about upgrading their gaming PC, or time to make sure their PC was ready for the new challenge. Usually this means at the very least making sure there is sufficient hard-drive space, but for peak performance and the very best experience, a deeper look at the state of a PCs health is in order.

One of the most important aspects of maintaining a gaming PC is temperature. A visually demanding game such as Ghost Recon Breakpoint not only pushes the GPU, it also works the CPU hard. If CPU cooling is not on point, then apart from reducing the lifespan of the CPU, there is a very real risk of a bluescreen due to excessive CPU temperature. Bluescreen lock-ups have become less and less an issue as windows has matured, however high temperatures will still cause a PC to lock up.

Such was the case with my gaming PC when it started blue screening when playing Wildlands, the Breakpoint technical test, and when doing CPU intensive video work. A quick case inspection confirmed that the stock heatsink was in good condition, with no dust collections reducing airflow, so a closer inspection of the CPU was required.

This revealed inadequate thermal paste, and a poorly fitting stock heatsink that came with the i7-4950k CPU. I didn’t have time to fit a watercooling solution like those found it cool Fierce PC Liquid Cooled PCs, so it was time to fit an upgraded heatsink — the Cryorig H7 – to ensure that this PC was ready for Ghost Recon Breakpoint! I didn’t realise at his point however that I was about to achieve a massive 40 degree celsius reduction in temperature!

Here’s a quick run down on the full PC Specs: 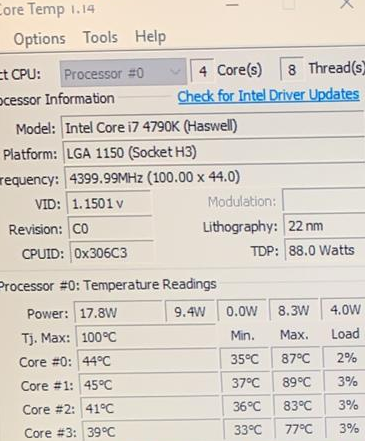 Here’s a look at the idle temperatures using the stock heatsink that came supplied with the processor.

These figures tell us a few of things:

1. At idle, under no load, the running temperature is between 39 and 45 degrees. Too hot for idle.

2. There is a 6 degree difference between the coolest and hottest core. Too much of a difference.

3. The maximum temperature was a scorching 89 degrees – and this occurred during the boot process! Too hot for stable computing.

All of the above indicate something is very wrong with CPU cooling, so let’s fit a new heatsink and check the new temperatures…

The photo on the right of the stock heatsink after removal shows the problems with thermal paste. As the paste does not cover the entire contact surface, the opportunity for heat dissipation is hugely reduced. In this case, the paste was applied directly to the CPU covering the entire area, the coverage on the heatsink upon removal should also have been 100%. These bright areas reveal where the heatsink was not in contact with the CPU at all, contributing to high running temperatures. 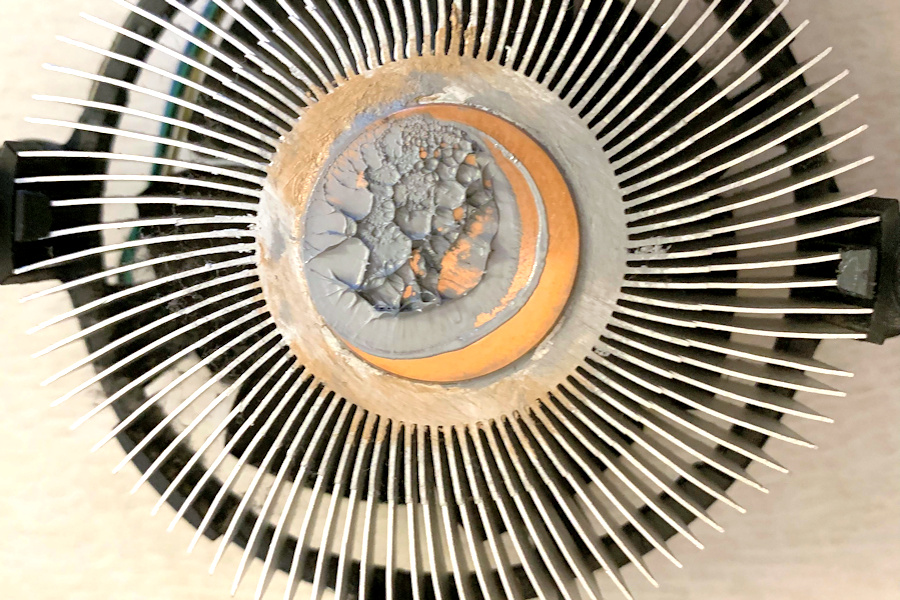 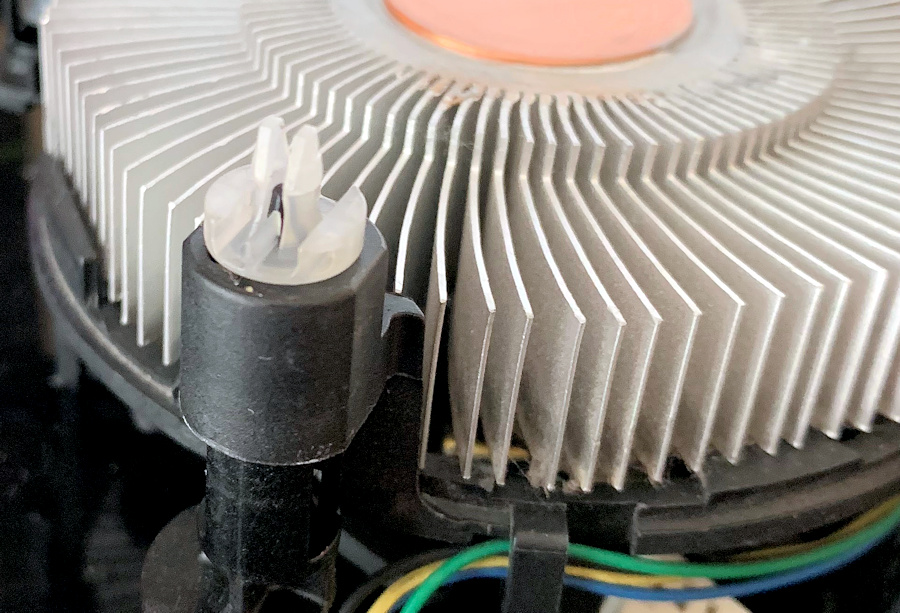 The reason for the poor contact area shown above comes down to the stock system of four plastic plugs being forced through the motherboard. If this is not done correctly, the two surfaces do not mate and heat is not drawn away from the CPU.

There are a number of reasons that a stock system using plastic plugs is far from foolproof.

The rigidity of the two plastic forks and manufacturing tolerances can make them difficult to push through the receiving holes on the motherboard (see photo on right).  Excess pressure pushing the pins home could result in motherboard damage. Not enough pressure can lead to the pins not being pushed fully home, resulting in the poor contact area as shown by the thermal paste photo above. 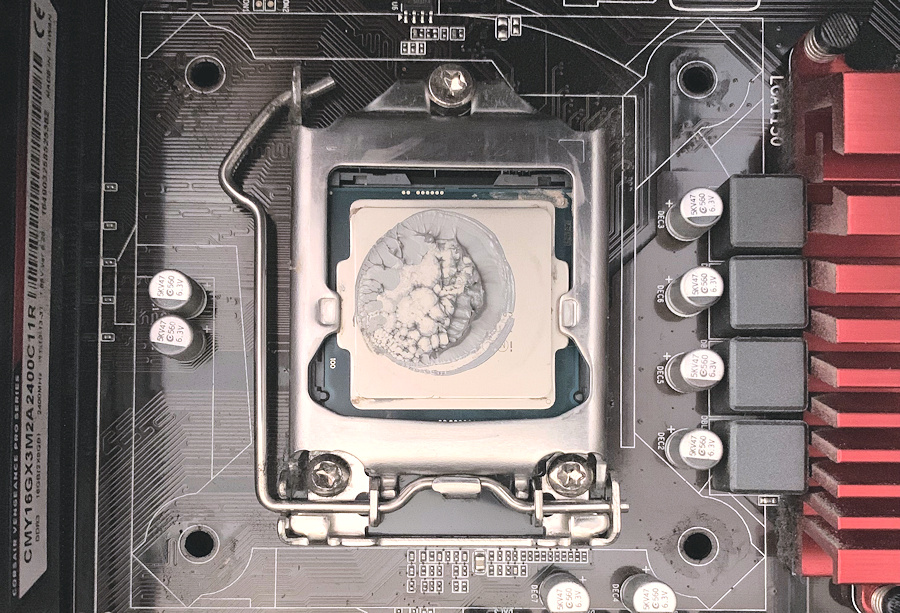 How much Thermal Paste?

In the images above, far too much paste has been applied. The puckering up of the paste shows the excess material that is actually acting against efficient heat dissipation.

Thermal paste is not meant to be used like a typical bedding compound, where excess material helps provide a good seal. The purpose of thermal paste is to take up any tiny gaps in the mating surfaces of the CPU and heatsink surfaces. These differences are tiny, so only a tiny amount of paste is required, but over the entire surface.

The best way to achieve this is to apply a thin line of paste across the width of the surface, then use a piece of plastic, firmly pressed against the surface to spread the paste evenly and thinly.

Apply to Heatsink or CPU?

Should thermal grease be applied to the heatsink, or the CPU?

If too much thermal grease is applied to a CPU, instead of filling in tiny little gaps, it becomes a blanket – which can actually reduce heat dissipation.

If you think about the surface of a CPU fully covered by this blanket, then a heatsink is mated with it, what about the areas of the CPU around the heatsink perimeter where there is no contact due to the difference in size between the heatsink and the CPU surface?

These areas around the perimeter of the CPU have nothing but a little thermal grease blanket – which is not good!

For this reason, applying thermal grease to the heatsink is the best way to ensure there is no excess thermal paste applied to the CPU.

The Cryorig H7 cooler has some great features at an affordable price. Their sales page explains it all in detail – here’s what I liked about it: 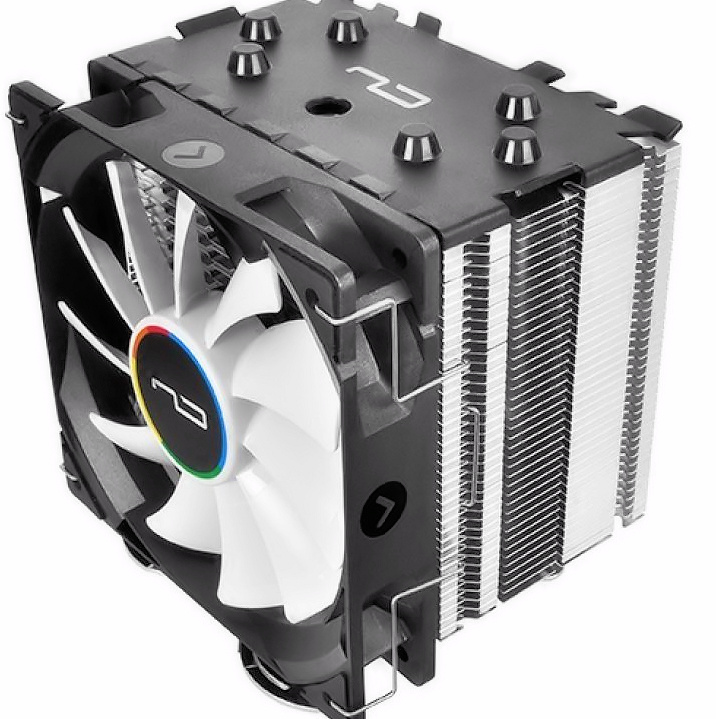 The Cryorig comes in impressive packaging, everything you need in the box, and very clear instructions.

I particularly liked the installation procedure broken down into several short sections, each one with a QR code printed at the top. So even once you have opened up your PC and started the install, if you need a reminder of any step. you just have to point your phones camera at the QR code and a short movie pops on your phone showing exactly how to proceed!

I also liked the quick release fan which allowed me to reposition the fan so that it was expelling hot air directly into the rear case fan. This helps with case temperatures and reduces the amount of hot air blowing around in the case. 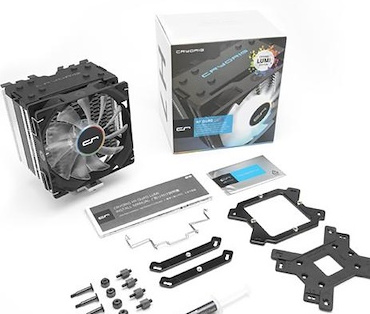 The heatsink surface is large, much bigger than the stock one I pulled out. This additional surface area will offer an immediate improvement in heat dissipation.

The fixing system is totally different from stock plastic pins and this is where the main opportunity for improvement lies. A back-plate is attached to the rear of the motherboard with 4 long screws which retain the heatsink inside the case.

As I was replacing a stock cooler, the Mobo was in-situ, so I anticipated a bit of a tricky job but it was actually pretty easy. My case allows rear access to the mobo so the back-plate was fitted in less than 1 minute.

A tiny drop of thermal grease was applied then spread using a piece of plastic to create a VERY micro thin layer. This stuff is not meant to be a typical bedding material – it’s only there to fill any microscopic deviations in two mating surfaces. Less is more folks.

As the cooler is large, it does obscure the holes and screws you are trying to lower it on to. So this was a little tricky fitting to a mobo already mounted in a case, but I managed it with one pair of hands in about 3 minutes.

Round to the back of the case again and a minute spent slowly tightening the four screw with a starhead spanner. I tightened them all a few turns each until it started to feel tight, then a little extra turn – no real effort required, you’re just making sure the heatsink is in contact with the CPU. 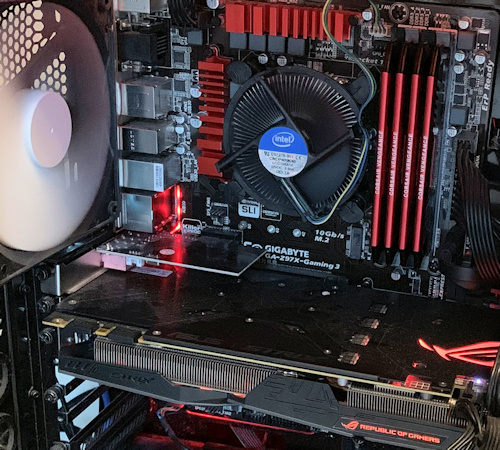 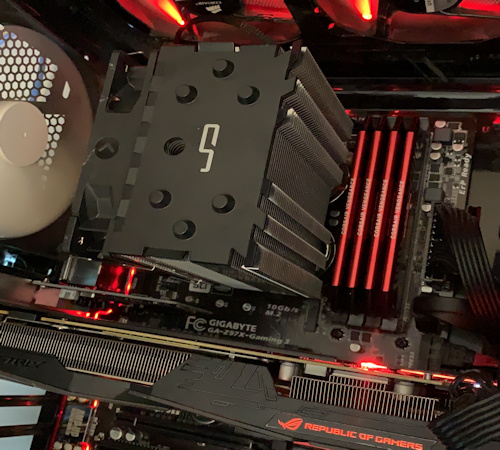 The photo above shows the PC case interior with the stock Intel heatsink in place.

It is extremely low profile, about the same height as the corsair RAM alongside!

While this is good for airflow around the case, this limited fin hieght drastically reduces CPU heat disapation.

The photo above reveals the huge difference between the stock cooler on the left and the Cryorig H7. It stands between 3 or 4 times the height, offering massive benefits as those long honeycomb fins draw heat away from the CPU.

You can also see in this photo how the fan has been positioned to extract hot CPU air straight into the cases expeller fan at the rear of the case. 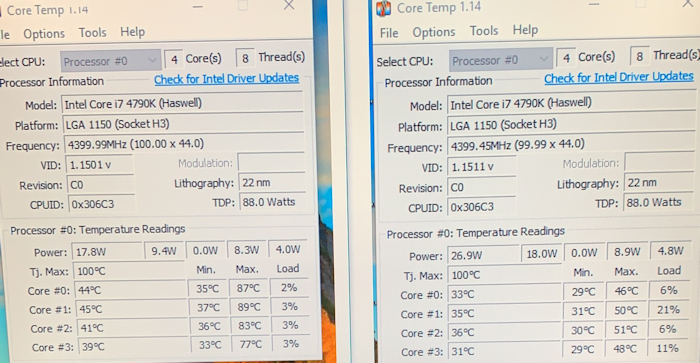 Using the excellent and free Core Temp, we can see the huge impact this quick, simple and inexpensive upgrade has had.

The temperature with an idle CPU load has dropped from a high of 44 degrees to a low of 31 degrees.

The temperature while gaming with Ghost Recon Breakpoint TT or Wildlands went from 100 degree blue screen, to less than 60 degrees thanks to the Cryorig H7!

For some reason, the Cryorig is a fair bit more expensive in the US than it is in the UK, which is quite unusual. However, this is definately a big bang for buck PC upgrade if you want to maximise your Ghost Recon Breakpoint experience with a stable PC.

There are heaps of youtube videos detailing the install process, but the one below is probably one of the best. Remember that the instructions come with QR quick links to the manufacturers installation videos too.