Gameshare.co have come to the rescue for Ghost Recon Advanced Warfighter 2 gamers everywhere with an alternative to the now defunt Gamespy Masterserver previously used by Ubisoft.  Combined with Gamedigger’s new GRAW 2 launcher that bypasses the now defuct Gamespy servers and automatically launches GRAW 2 and connects to the Gameshare server, fans now how a simple alternative to Gamespy.

The launcher allows gamers to browse GRAW2 multiplayer servers – something thought impossible after the demise of Gamespy. 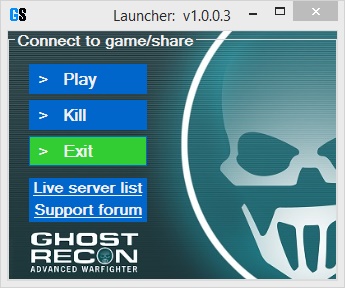 Full details on the method can be found in our FAQ entry Playing Ghost Recon Advanced Warfighter 2 online, or you can jump straight to the GRAW2 Launcher download.

Many thanks to Gameshare.co for this solution and to Struth for his work in bringing this launcher to the Ghost Recon community.