Freedom to roam confirmed for Wildlands

One of the concerns raised by fans after the excitement about Ghost Recon getting the open world treatment for Wildlands was what happened in co-op play if one of the group strayed too far from the host. You know, for operational or tactical reasons someone wanted to take a really wide berth or was just fascinated by a particular tree and felt like composing a poem while the rest of the group got on with the mission. What would happen? Would your leash suddenly tighten and pull you up short just as you were getting into a decent flank position?

The good news is that the Dev team have been happy to confirm to us that there is no limitation! You are free to roam as a group or on your own in the whole world. Yep the whole world. This could be particularly useful if you do have a helicopter or other transport included as part of your approach tactic and do not want to be tethered to the other players you are in co-op with, but is generally just really good news for all  players! 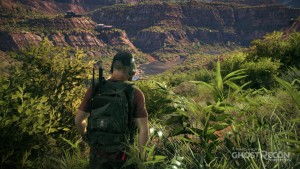 Probably a lot of you will be relieved to hear this news even if you are part of a tight-knit group that works in a close formation around one mission. It’s not entirely unlikely that one of the group could fall asleep at the wrong time during a late night session after a few beers … *coughs*. What do you guys think? Does this game keep ticking the right boxes?